Been a little while since my last post, nothing of interest happening lately.

The beauty of working from the old manuals is that many of them are now public domain and available on places like archive.org or Google books.

There's also the rather amazing Wiktenauer project, which deserves all the love.

Broad-Sword and Single-Stick With Chapters on Quarter-Staff, Bayonet, Cudgel, Shillalah, Walking-Stick, Umbrella and Other Weapons of Self-Defence by the same gentleman (who is quite a fascinating character in himself, being one of the first British converts to Islam).

The Art of Defence on Foot: With the Broad Sword and Sabre  By C. Roworth, John Taylor (Broadsword Master of London.) I particularly like the footwork Roworth teaches.

Instructions for the exercise of small arms, field pieces, etc., for the use of her majesty's ships
This is a regulation Royal Navy training manual, of particular interest (to me at least) is the chapter on the Cutlass and the exercises for training in its use.

There's loads more out there, don't assume that just because its old its unavailable!
Posted by Unknown at 06:22 No comments:

Suffrajitsu has just been released.

This is an interesting alt-history take on the militant arm of the Suffragette movement. It tells the story of the "Amazon" bodyguards who protected the Pankhursts from the police and enemies of the movement.

While it is, obviously, a work of fiction with liberties being taken it is also firmly grounded in actual history, there were women who trained in Ju Jutsu and Bartitsu and carried Indian clubs under their skirts to fend off attackers (or attack the deserving by all accounts). This article is a good overview of what we know about them in reality.

I really enjoyed the first issue. I like the fact that they have strong female characters with agency as well as male allies. Its also a pretty exciting and action-packed romp.

Get it on Comixology.
Posted by Unknown at 04:38 No comments:

Assuming you've found this blog and you have no idea what I'm talking about (who are you and what are you doing here? Say hi or something), I thought I'd better write a bit of a terminology explanation for the Martial Arts I train in.

Doce Pares as I learn it looks like this:

Doce Pares as I practise it looks like this:

As you can see I've got quite a way to go.


The particular styles I'm studying are the longsword techniques of Fiore De Liberi and the 19th century Infantry Officer's Sabre techniques of John Musgrave Waite as taught by Matt Easton at Schola Gladiatoria.


I'll update this post as I go along or if anyone needs clarification.
Posted by Unknown at 08:38 1 comment:

2 Saturdays ago found me braving the (admittedly very short) snowfall and making my way to Ealing to attend the British Sabre Level-Up Day hosted by Schola Gladiatoria.

I'm new to Sabre and HEMA in general so, apart from giving me something social to do, I felt like I really needed some focussed instruction, beyond the once-every-two-weeks I'm doing at the moment. I was not disappointed.

We started off with an introduction and a refresh of the basics of Sabre - nothing new here, being new I practice this stuff a lot in class.

Next up was some work on feints from Waite and Hutton's books, again nothing I haven't done before, but it was really good to spend some serious time on them. - I feel like I can now convincingly feint a cut number 1.

The next session was footwork with Colin from the Bradford branch of Schola. Colin focusses on Roworth's work, which is from an earlier period than the Waite and Hutton that I'm used to. This was a pretty interesting session, the footwork was surprisingly similar to the Tai Chi/Taiji footwork I've done in the past. The idea seems to be to fight from what I'd call a cat stance and transfer your weight entirely to the other foot before moving.

Next up we learned the first part of the 1st Practice from Hutton's Cavalry Swordsman - essentially a partner form/drill where one partner cuts, the other parries and counters, Partner A parries and counters and so on. This was fine apart from one parry that we don't normally use which took a little while to get into my brain. Also always a PITA co-ordinating hands and feet.

Taylor's 10 lessons: This was great, though I think we only did the first 3. Taylor is, as I understand it, this mysterious figure whose 10 lessons are included in some versions of Roworth's book. They are broadly similar to Hutton's Practice, except that they are written in a rather "picturesque" fashion. They seem to work on a call and response system, something like "Cut at my head, defend your own, cut at my leg, defend your head".

Last up before the mini-tournament and hometime we did some closing and grappling techniques. Short, sharp and to the point - I felt like my FMA experience gave me a bit of an advantage here, since I'm quite used to using my left hand for checking. My takeaway from this is essentially "grab the handguard and stab him".

Mini-tournament - this was a fun little round-robin thing scored to 4 points (head 2, everywhere else 1, afterblows negate score and doubles count 0). Everybody got 5 fights and wrote their points down, at the end the points were added up and the top two got to fight it out for the glory of first place. I impressed myself by winning one of my fights, the others I lost 2-4,2-4 and 0-4 (this was against a fairly terrifying German gentleman, who I learned was also a fellow FMA practitioner).

Here is a picture of me masquerading as a badass: 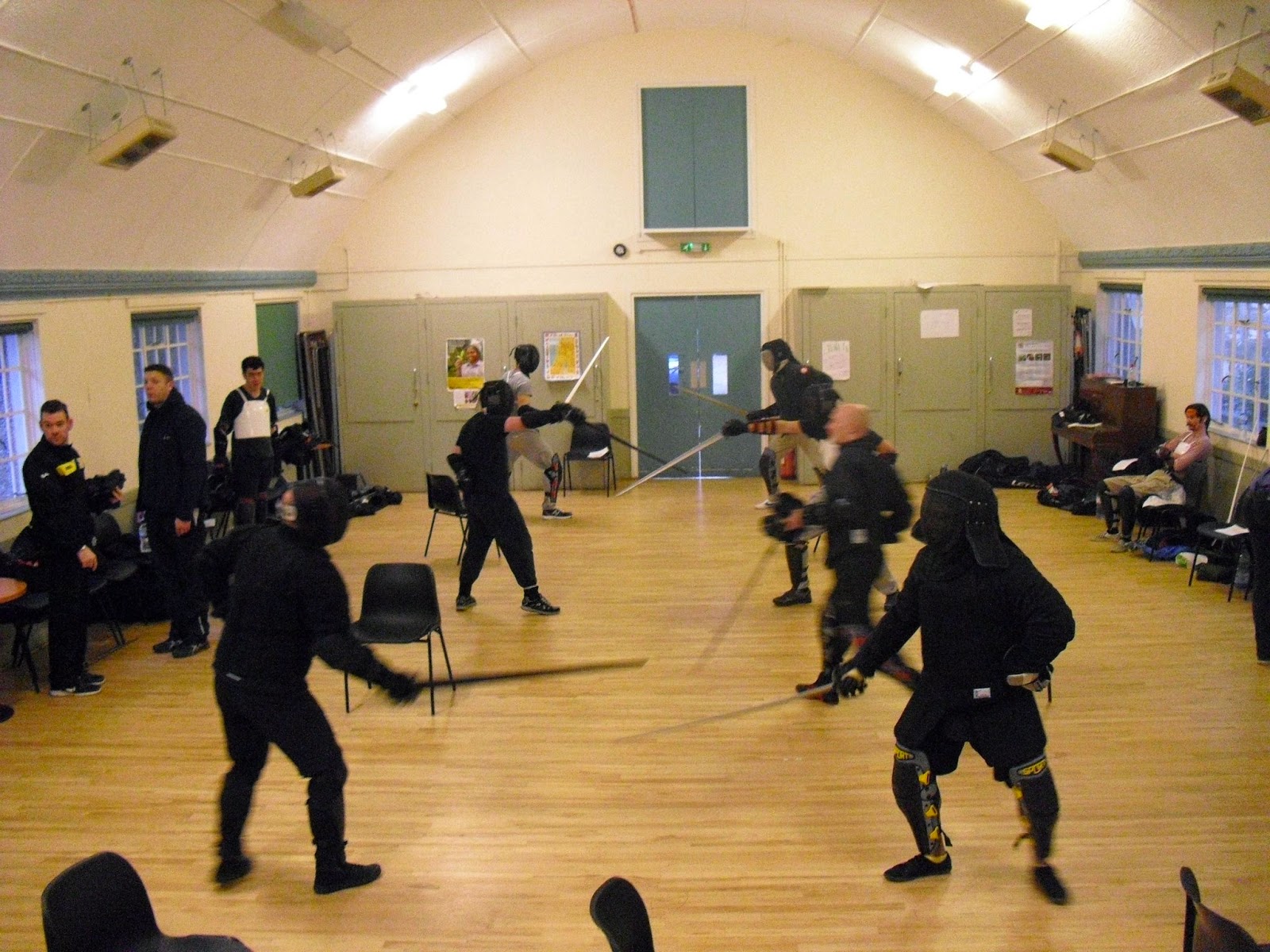 I find lately that I can't manage training mid-week.

I should do more strength and cardio on my off days.

The summers aren't amazing either, but at least you get some warm with your wet.

I'm kinda apprehensive about this, I do train empty hand stuff, but I am even worse at it than weapons. My one and only "real" competitive fight looked like this:


That said, I have met a few of the people who are going and my HEMA teacher speaks highly of the organiser so it should be a good time.


May - May Melee (Virtus Sword School's event, a bunch of HEMA seminars and a tournament)

This looks like huge fun, its not the type of HEMA I study myself (I do Fiore Longsword and Waite's Sabre) but I am assured that its beginner friendly.

Also, I'm going with a non-HEMA friend, so I'm assured of not being the noobiest noob there.

I've been a Bullshido member since 2005 or 2006 (longer than I've been in the UK) and I've still never made it to a Throwdown. I'm really hoping to change that this year.

This could be a pain though because I will need a Schengen Visa, plane tickets and accommodation.


August - FightCamp (All the HEMA, all the time)

This is my HEMA teacher (the mighty Matt Easton)'s event and it looks fantastic.

This is where I have more experience. I've been doing FMA for a few years now and I've been to this event twice, its always a blast.

I've recently ticked something off my bucket list and started training with an actual, no-shit Dog Brother. We train in a park on Saturdays and its awesome.

For anyone who doesn't know, the Dog Brothers are these guys:

and it is one of my dearest ambitions to one-day be one of them. (Assuming I ever make it to a Gathering, which I have yet to do).

That is all, carry on about your day.
Posted by Unknown at 07:16 No comments: